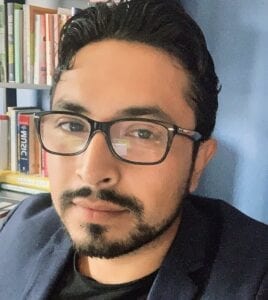 It’s an absolute pleasure to welcome the talented and kind Andrew Rodriguez to our Villa Musica team! Passionate about mariachi music? Well, be sure to read all about Andrew’s expertise on the style below.

Like many of us deeply invested in the arts, Andrew was inspired by his family to pick up an instrument at an early age. After watching his older brother playing mariachi in middle and high school, Andrew inevitably also wanted to strum through melodies. Yet, instead of going the guitar route, he instead was more drawn to the vihuela, a smaller guitar-like instrument common in mariachi music. As Andrew delved deeper into the world of mariachi, he discovered groups such as Mariachi Vargas de Tecalitlan and Mariachi Sol de Mexico. While they certainly influenced Andrew’s journey into the genre, he also grew very attached to the older “bolero ranchero” music of mariachi singer Javier Solis. Andrew found Solis’ arrangements to be “harmonically interesting and as a vihuela player, I was always intrigued by the not-so-traditional chord progressions.” Through these musical discoveries and practice, Andrew began performing in backyard parties with his brother at the age of 13. Andrew’s audiences expanded and diversified over time with his most notable experience being with the San Diego Symphony for the world premier of “Brazos de Niebla” in 2018.

Heading to college, he accomplished a Music Associates degree from Southwestern College, a Bachelors in Music from SDSU, a Masters of Arts in Teaching from SDSU, and most surprisingly, a biological science program at the University of California in Riverside. While his passions initially were in performance and biology, Andrew grew to also be very fond of and fulfilled by teaching. “I see teaching music as a way to give back to my community. I also pursued teaching music because I want to share quality music education to the underserved communities of San Diego. Growing up in south San Diego, there were not many resources to learn music. Fortunately, the mariachi programs at the time provided me an outlet to learn music. I hope to keep the tradition of playing mariachi alive, all while providing students with concise and effective music instruction.” Currently, Andrew teaches a mariachi group class at Villa Musica as well as mariachi, band, and orchestra at Bell Middle School in southeast San Diego.

Regarding his teaching style, Andrew focuses on being both empathetic and conceptual. His empathy allows him to know his students as people first: “I think relationships are a priority when it comes to teaching young students. With a well-developed relationship, both the student and teacher can understand how to create a dynamic to learn and communicate.” He also emphasizes the conceptual side of teaching to ensure that his students know that there is a reason to everything practiced in rehearsal: “Understanding the ‘why’ to the activities practiced in class is very important for their long term development as life long learners.”

In his free time, Andrew loves the adventure of travelling, both for leisure and personal development. Additionally, he enjoys attending music education conferences in different states to develop diverse perspectives to teaching, exercising, reading books, trying out new restaurants in San Diego, and of course, the occasional nap. Stay tuned for potential future mariachi classes at Villa Musica instructed by Andrew!